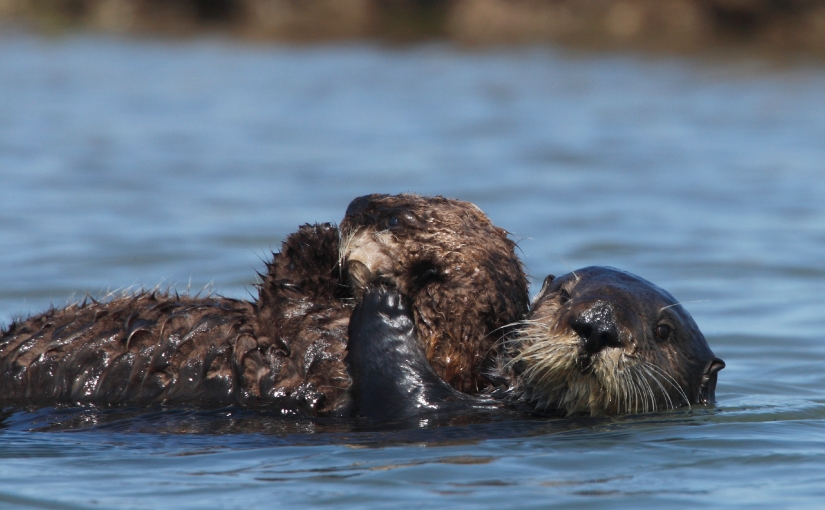 That’s one of the thoughts on the minds of Aquarium scientists in the wake of a new study, which confirms the power of sea otters to restore coastal ecosystems.

Since 2002, the Monterey Bay Aquarium has reared rescued sea otter pups for release to the wild. Female otters in our exhibit serve as their “surrogate mothers,” teaching them critical life skills like how to groom themselves and forage. The hope is that when the pups are released in Elkhorn Slough, a wetland 20 miles north of the Aquarium, they’ll be able to thrive on their own.

A newly published study confirms that these surrogate-reared pups are surviving as well as their wild kin—and the resulting bump in the otter population at Elkhorn Slough is helping to restore the estuary ecosystem.

The remarkable success of the Aquarium’s program, documented in Oryx, highlights a tremendous opportunity: to help sea otters contribute to the revival of other coastal estuaries along the California coast.

Historically hunted for their fur, southern sea otters were nearly wiped out in California in the 19th century. Thanks to federal protection and a concerted conservation program, the population has slowly recovered in recent decades. But California’s wild population has plateaued at just over 3,000 sea otters—far below the historical level of 18,000-20,000. As a keystone species, sea otters have earned the title of “ecosystem engineers,” because they can deliver outsized benefits to degraded stretches of coastline.

The Aquarium’s sea otter surrogacy program is the first of its kind—a pioneering approach to rescuing, rearing and returning sea otter pups to the wild. From 2002-2016, Aquarium staff released 37 surrogate-reared pups in Elkhorn Slough, a national estuarine research reserve. Scientists now estimate that those surrogate-raised otters and their wild offspring account for more than half of Elkhorn Slough’s otter population growth over the past 15 years.

“The success of those individuals wound up having both population-level and ecosystem-level impacts,” says Karl Mayer, sea otter field response coordinator at the Aquarium and lead author of the new scientific study. “This lays the groundwork for a new discussion around returning sea otters to more of their historical range.”

“We knew this was a great program and a feel-good story,” Aquarium Chief Scientist Dr. Kyle Van Houtan added. “Now we know this is great science.”

In need of a nudge

Before the onset of the fur trade, sea otters ranged from northern Japan through

Alaska and down the West Coast all the way to Mexico’s Baja California. But today, California’s sea otters are limited to a 300-mile stretch of the Central Coast, from around Santa Cruz to Santa Barbara.

“In the center of their range, sea otter populations are dense and close to carrying capacity,” Karl says. “However, at the northern and southern edges, kelp is sparse—providing little shelter for otters to evade white shark bites. For the population to grow in a meaningful way, the range itself might need to expand into historical habitats to which sea otters have not yet returned. Through our surrogacy program, we may have figured out how to facilitate that expansion.”

In the 1960s and ‘70s, wildlife managers succeeded in several attempts to move sea otters from established territories to waters they inhabited before the fur trade. They helped sea otters return to Southeast Alaska, British Columbia and Washington state, but an effort to reestablish sea otters in Oregon failed.

In California, translocation took a hit after more than 100 wild sea otters were moved to San Nicolas Island, 70 miles south of Ventura, starting in 1987. The effort was politically fraught and biologically unsuccessful. More than 80 percent of the translocated sea otters disappeared or swam back to the mainland. While the island’s sea otter population has grown in recent years (one estimate puts it over 80 animals), many still remember the translocation’s initial shortcomings.

Any new proposals to reintroduce sea otters to more of their historical range, Karl cautions, must consider the lessons of San Nicolas Island.

Where to go from here?

When the Aquarium first started pairing exhibit otters with orphaned pups, the goal was not to help sea otters return to their historical range. The Aquarium team simply hoped the surrogate otter moms would have more success teaching these rescued pups than the humans who tried it before them.

The new research paper confirms that surrogate-reared pups survive at a rate comparable to that of their wild kin. Unlike the animals translocated to San Nicolas Island, these wild-released otters are accepting Elkhorn Slough as their home territory.

“Typically, if a sea otter has an established home range, it’s going to want to move back to it,” Karl says. “I think that’s what we saw with the majority of the animals that were moved to San Nicolas. They tried to go back home.”

By contrast, most of the surrogate-reared sea otters stayed put after they were released into Elkhorn Slough. Karl says that’s because they were “ecologically naive” when they got separated from their mothers. “They just hadn’t been alive long enough to establish a territory,” he says. “In many cases, they probably stranded the same day they were born.”

The surrogate-reared otters’ lack of site fidelity, combined with survival and reproduction rates on par with their wild counterparts, makes reintroducing these animals elsewhere a concept worth investigating.

“Surrogate-reared females were among the first to produce pups in Elkhorn Slough,” he says. “The fact that they have no ecological memory of another home makes them better candidates for reintroduction to unfamiliar habitat.”

Where and when that might happen remains to be seen. For now, the Aquarium is literally taking baby steps.

4 thoughts on “The feel-good science behind sea otter surrogacy”