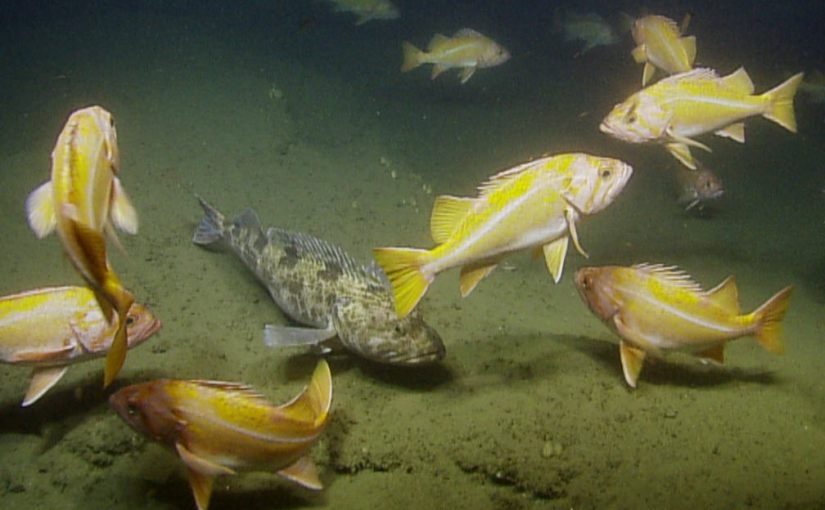 Counting fish in the ocean isn’t easy—particularly when they swim among jagged rocks and along undersea cliffs hundreds of feet below the waves. To help, the Monterey Bay Aquarium Research Institute has developed a new camera system called the Benthic Observation Survey System, or BOSS.

A five-foot metal cylinder that features an array of cameras and lights, the BOSS is designed to be lowered from a ship to the seafloor and land upright on rocky terrain. There, it will help scientists survey fish populations using eight high-definition video cameras.

Researchers and policymakers need this technology to find out more about life in the ocean and how to better protect it. MBARI developed the BOSS with input from investigators at Moss Landing Marine Laboratories and The Nature Conservancy.

“The scientists I’m working with are looking at areas that previously were heavily fished out,” explains MBARI staff engineer Chad Kecy, who led the effort to design and build the BOSS. Chad and his colleagues are trying to get a better understanding of how fish populations are recovering in these areas, what species are present, how big they are and where they swim.

Chad likes the challenge of solving problems on a tight timeline. The BOSS had to be built and tested in a matter of months, because the scientists who planned to deploy it already had research trips scheduled on boats that could not wait.

“Now the scientists are busy analyzing all this video they were able to capture with the tool that we developed,” Chad says.

Mary Gleason, science director for The Nature Conservancy’s California Oceans Program and who helped develop the BOSS, says it can fill important gaps in existing data, based on its inaugural voyage: “We showed that we could get 400 video surveys done across 300 miles of coastline during one three-week cruise. So that’s pretty efficient in terms of data quantity.”

END_OF_DOCUMENT_TOKEN_TO_BE_REPLACED

Say what you will about 2016—the world made some big waves to protect the ocean. As the sun sets on this year, let’s reflect on its brightest marine moments:

Working with our partners, the Aquarium campaigned in support of Proposition 67, the California ballot measure to uphold the statewide bag ban. We also urged a NO vote on the deceptive Proposition 65, which could have further delayed the ban’s implementation.

Voters agreed, approving Proposition 67 and rejecting Proposition 65. And just like that, single-use plastic carryout bags are now a thing of California’s past. The new law could prevent billions of plastic bags from polluting our ocean each year—which means a cleaner future for marine wildlife and coastal communities.

END_OF_DOCUMENT_TOKEN_TO_BE_REPLACED

Today is Ocean Day, when Monterey Bay Aquarium joins other ocean advocates in Sacramento for a day-long celebration of ocean and coastal health.

For the seventh year, the Aquarium is hosting a reception for nearly 200 state legislators, government officials, business executives and ocean advocates—people dedicated to conserving the health and vitality of our state’s ocean and coast.

We have so much to celebrate here in California, thanks to forward-thinking decisions and policies that have made our state a global model for ocean conservation and thriving coastal communities.

Now more than ever, we need to build on our progress and continue to lead by example. This means ensuring we have strong, conservation-minded leaders for agencies like the California Coastal Commission and the Fish and Game Commission.

END_OF_DOCUMENT_TOKEN_TO_BE_REPLACED

From Nov. 30-Dec. 11, leaders from more than 190 nations are gathering in Paris for the 2015 United Nations Conference on Climate Change, or COP21. The conference aims to achieve a binding international agreement to slow the pace of climate change. If we as a global community take bold and meaningful action in Paris, we can change course and leave our heirs a better world. Monterey Bay Aquarium is working to raise public awareness about the many ways our carbon emissions affect ocean health, including ocean acidification, warming sea waters and other impacts on marine life. Today, we shine a spotlight on one of the ocean’s most powerful tools to weather the impacts of climate change.

The climate talks in Paris aren’t just about trying to prevent future catastrophe. They’re also about preparing for, and mitigating, the changes already underway.

The goal at COP21 is to reach an international accord that will substantially cut the world’s carbon emissions, limiting global average temperatures to a 2-degree Celsius rise. But even if we achieve this best-case scenario, climate change will still have serious impacts on the ocean, including higher sea levels, warmer waters, shifting species distributions and ocean acidification.

END_OF_DOCUMENT_TOKEN_TO_BE_REPLACED

The California State Capitol is 75 miles from the coast, but the laws forged there can have big impacts on the health of the ocean. That’s why the Monterey Bay Aquarium supported a half-dozen ocean-related bills during the 2015 legislative session. Many were signed into law.

The Aquarium also hosts the annual Ocean Day California reception in Sacramento, bringing together California legislators, state administrators, businesspeople and ocean conservation leaders to celebrate conservation of the ocean. Each year we honor California ocean champions who took action to advance marine and coastal health – including backers of important legislation.

Here’s our final scorecard for the 2015 legislative session.

END_OF_DOCUMENT_TOKEN_TO_BE_REPLACED 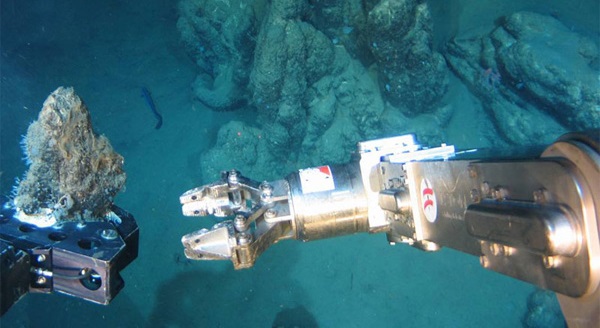 Thousands of feet below the ocean’s surface lies a hidden world of undiscovered species, ancient animals and unique seabed habitats—as well as a vast untapped store of natural resources including valuable metals and rare-earth minerals. There’s growing demand globally to tap these minerals, which are key components in everything from cars to computers, skyscrapers and smartphones. And there are proposals around the world to begin mining the seafloor: in the Indian Ocean, off Papua New Guinea, and in the Red Sea.

Deep sea mining will have impacts on ecosystems that are lightly mapped and poorly understood. So, researchers from the Center for Ocean Solutions in Monterey and co-authors from leading institutions around the world propose a strategy for balancing commercial extraction of deep-sea resources with protection of diverse seabed habitats. Their approach, published this week in the journal Science, is intended to inform upcoming discussions by the International Seabed Authority (ISA) that will lay the groundwork for future deep-sea environmental protection and mining regulations.

“Our purpose is to point out that the ISA has an important opportunity to create networks of no-mining marine protected areas (MPAs) as part of the regulatory framework they are considering at their July meeting,” says lead author Lisa Wedding, an early career science fellow at the Center for Ocean Solutions.  “The establishment of regional MPA networks in the deep sea could potentially benefit both mining and biodiversity interests by providing more economic certainty and ecosystem protection.”

Take an in-depth look at the research and the issues. 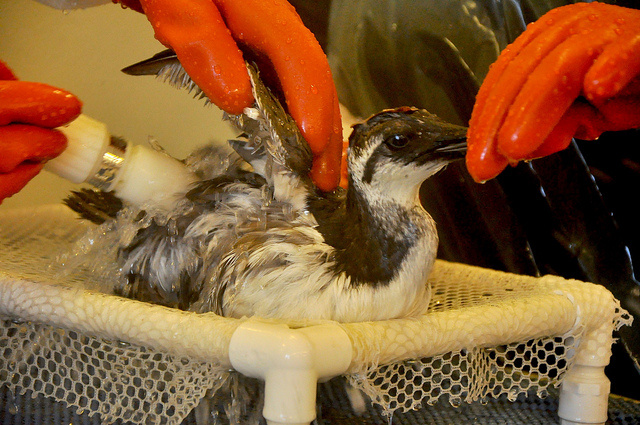 Two weeks after a pipeline spilled more than 20,000 gallons of crude oil into the ocean near Santa Barbara, oiled wildlife continues to show up on southern California beaches. Now, the Aquarium has dispatched a team of specialists to help care for rescued seabirds, in collaboration with California’s Office of Spill Prevention and Response. Other zoo and aquarium colleagues in California have also responded.

Nearly 200 seabirds and marine mammals have been affected thus far, and about half have survived, according to state wildlife officials.

It’s not the first time the Aquarium has stepped up to care for oiled marine animals in the wake of oil spills. In 1989, we helped rescue and care for sea otters in Alaska after the Exxon Valdez tanker disaster in Prince William Sound. More than 25 years later, that spill continues to affect the health of the marine environment.

While the recent Refugio spill in the Santa Barbara Channel is – fortunately – a relatively small one, it nonetheless carries environmental costs. Oil has been observed in four marine protected areas that are vital feeding and breeding grounds for fish, marine mammals and birds. Two state beaches remain closed until further notice. Commercial fishermen are shut out of 138 square miles of prime waters.

“Incidents like this are unfortunate reminders that offshore oil and gas operations in California pose an ongoing threat to valuable ocean and coastal ecosystems that we’ve worked so hard to protect,” says Aimee David, the Aquarium’s director of ocean conservation policy. “It should be a priority to remove as many of these facilities as soon as possible, and do so in a way that is based on sound science, meets strict state and federal environmental standards, and bolsters funding for marine protection and conservation efforts.”

For the short term, the Aquarium will be working in Santa Barbara to help oiled seabirds recover from the spill. Over the long haul, we’ll be active in Sacramento in support of policies to protect California’s vibrant ocean ecosystems from oil spills and other threats.