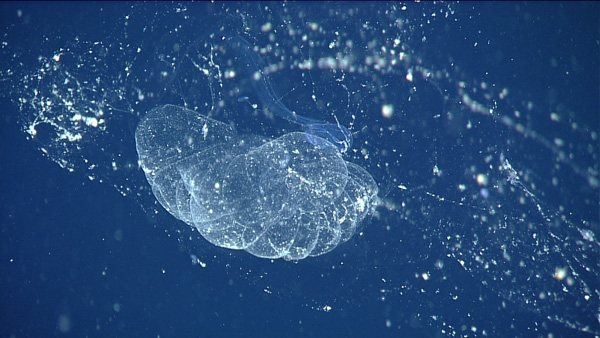 Until now, little has been known about how microplastics move in the ocean. A new paper by our colleagues at the Monterey Bay Aquarium Research Institute (MBARI), just published in the journal Science Advances, shows that filter-feeding animals called giant larvaceans collect and consume microplastic particles in the deep sea.

Larvaceans are transparent tunicates that live in the open sea and capture food in sticky mucus filters. Plastic particles accumulate in the cast-off mucus feeding filters and are passed into the animals’ fecal pellets, which sink rapidly through the water, potentially carrying microplastics to the deep seafloor.

The new findings contribute to an emerging picture about the ubiquitous nature of ocean plastic pollution. Over the last decade, scientists have discovered tiny pieces of plastic in all parts of the ocean—including deep-sea mud. One recent study documented microplastic fibers in deep-sea sediments at levels four times greater than an earlier study had found in surface waters. Plastic has also been discovered in the tissues of animals at the base of the ocean food web. Another just-published study found that fish confuse plastic particles with real food items because it smells just like organic matter in the ocean.

Despite their name, giant larvaceans are less than 10 millimeters (4 inches) long, and look somewhat like transparent tadpoles. Their mucus filters—called “houses” because the larvaceans live inside them—can be more than 1 meter (3 feet) across. These filters trap tiny particles of drifting debris, which the larvacean eats. When a larvacean’s house becomes clogged with debris, the animal abandons the structure and it sinks toward the seafloor.

In early 2016, MBARI Principal Engineer Kakani Katija was planning an experiment using the DeepPIV system to figure out how quickly giant larvaceans could filter seawater, and what size particles they could capture in their filters. Other researchers have tried to answer these questions in the laboratory by placing tiny plastic beads into tanks with smaller larvaceans. Because giant larvacean houses are too big to study in the lab, Kakani decided to perform similar experiments in the open ocean, using MBARI’s remotely operated vehicles (ROVs).

When she discussed this experiment with Postdoctoral Fellow Anela Choy—who studies the movement of plastic through the ocean—they realized that in-situ feeding experiments using plastic beads could also shine light on the fate of microplastics in the deep sea.

In June 2016, the researchers outfitted MBARI’s  ROV Doc Ricketts with a container of seawater and tiny color-coded plastic spheres, from one-hundredth of a millimeter to two-thirds of a millimeter in diameter. After sending the ROV down into Monterey Canyon, the team released small quantities of microplastic beads near giant larvaceans, then pulled the ROV back to watch what happened.

For at least 11 of the 25 larvaceans they observed, the beads were trapped by the larvacean’s fine-textured inner feeding filter. In six of these cases, the researchers observed a larvacean ingesting the plastic beads, which were visible inside its transparent body.

Next, they used the ROV to capture the six larvaceans with plastic beads in their guts and brought them to a shipboard lab on the research vessel Western Flyer. They kept the animals in the lab for 12 hours. In that time, all of the plastic beads had passed through the larvaceans’ guts and ended up in their fecal pellets.

The researchers were surprised to discover that the larvaceans had collected and consumed not just the smaller microplastics, but particles of all sizes.

Rapid transport into the depths

The research team then measured how quickly fecal pellets of giant larvaceans sink through the water column. The fecal pellets were estimated to sink at about 300 meters per day. Combined with previous studies showing that discarded larvacean houses can sink as rapidly as 800 meters a day, their results suggest that larvacean houses and fecal pellets can quickly transport microplastics from near-surface waters to the deep seafloor.

Laboratory studies have shown that other common filter-feeding ocean animals, such as salps, can also ingest microplastics. Kakani and Anela, the lead authors of this study, and their co-authors are now conducting ROV experiments to find out if these animals behave similarly to larvaceans in their natural environments. Anela and MBARI Senior Scientist Bruce Robison are keenly interested in how microplastics might be transferred from one animal to another through deep-sea food webs.

In earlier experiments, Kakani had shown that giant larvaceans can filter seawater faster than any other drifting open-ocean animal. This finding, along with this new research, suggests that larvaceans have the potential to be important, unintentional consumers of microplastics in the ocean. Because many  deep-sea animals eat larvaceans, their fecal pellets and cast-off mucus houses could introduce microplastics to midwater food webs.

Microplastics that reach the deep seafloor don’t just disappear. Many are likely to be ingested by benthic animals, which rely on cast-off larvacean houses as an important source of food.

Kakani is quick to point out that her study is just a first step. Many basic questions about microplastics in the ocean remain unanswered.

“There’s a lot of work being done studying plastic in the guts of seabirds and fish,” she said, “but no one has really looked at plastics in deeper water. We’re currently working on experiments to study the concentrations of microplastics at different depths in the ocean, using water samples and maybe even cast-off larvacean houses.”

The MBARI team is collaborating with the Monterey Bay Aquarium to communicate the impacts of large-scale plastic pollution in the ocean. As Anela put it, “The Aquarium is deeply committed to the conservation of ocean ecosystems, and has vast experience working to influence policy with science. By combining this expertise with MBARI’s knowledge and experience with deep pelagic ecosystems, we’re working to understand the transport and cycling of plastics through ocean food webs, and what this might mean for humans.”

This summer, the Aquarium, along with 18 other top public aquariums in the United States, launched the #InOurHands campaign to encourage individuals to cut back on single-use plastics. The aquariums also committed to change their own business practices by eliminating plastic straws and shopping bags, and moving to reduce or eliminate single-use plastic beverage bottles by 2020. All of this is designed to accelerate the design of innovative new products and materials to replace plastics in the supply chain.

“We’re just beginning to understand the full impacts of ocean plastic pollution on ecosystems, marine life and human health,” says Aquarium Executive Director Julie Packard. “But we already know enough to say that now is the time to act. By using our voice with visitors and in our communities, our collective buying power and our relationships with our vendors, we can make a big difference on a pressing issue that threatens ocean wildlife, and in turn, human well-being.”

Learn more about our work to reduce ocean plastic pollution.

2 thoughts on “Pinpointing plastic’s path to the deep sea”