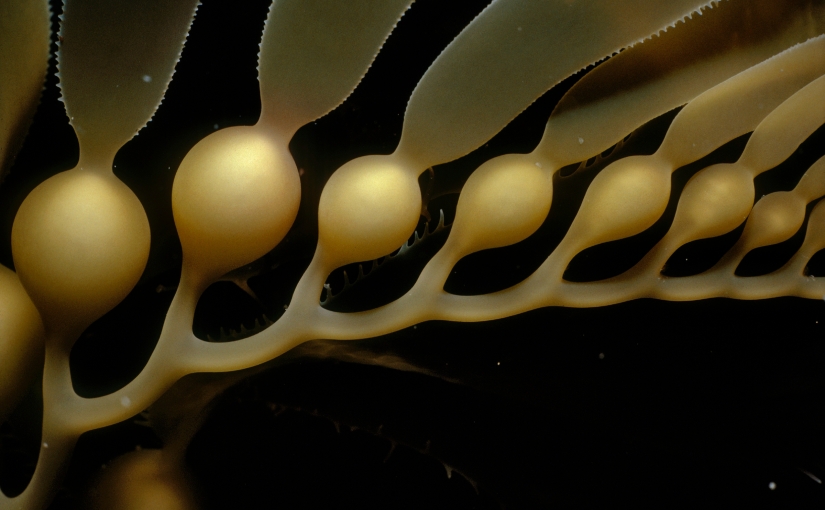 The ocean keeps scrupulous records of its past: The comings and goings of myriad creatures, the evolving conditions they lived in, even details of who ate what.

“The ocean has a memory. We just have to tap into it,” says Kyle Van Houtan, the Aquarium’s science director.

Consider the secrets we might glean from studying a single blade of algae – commonly known as seaweed. During the year or two it was alive, were the surrounding waters pleasantly cool, or unusually acidic? What plants were its neighbors? And what was the world around it like?

With the help of modern technology, historical specimens can now answer some of these questions. And in the world of ocean science, the details amount to hidden treasure.

Like antiques that startle and thrill their owners, proving to be worth small fortunes, pressed seaweeds can yield surprisingly valuable data. Museums and herbariums hold collections of these souvenirs from the ocean, often dating back decades – and too often left unnoticed in deep storage.

Kyle lucked into one such trove when he started work at the Aquarium last year.

“I was on my orientation tour of the building, and I saw a large blue metal cabinet behind a ficus tree. I said to my guide ‘What’s in here?’” he recalls. “We moved the tree—and lo and behold, inside were hundreds of specimens of red, green and brown algae.”

He sensed an opportunity.

To understand how the ocean is changing over time, scientists need access to long-term data—historical records from past times, against which to compare newer findings.

This is especially critical given what he calls “the full dynamic variability” of the Pacific, which includes complex ocean currents, climate patterns like El Niño, as well as long-term changes like warming, acidification and rising sea levels.

To make well-informed predictions about the ocean’s future, it helps to place present-day measurements in historical context. As Kyle puts it: “What’s going to happen in the next 50 years that hasn’t happened in the last 500?”

A scientist collecting such data from algae, he notes, might stumble across unexpected works of art, like a 30-year-old spray of kelp, dried and delicately pressed inside a folder.

“You have to pause and appreciate the beauty,” Kyle says.

The legacy of Izzie Abbott

Any discussion of Pacific seaweeds would be incomplete without mention of the late Stanford University professor, Isabella Abbott. Nicknamed Izzie, the renowned marine botanist was the first native Hawaiian woman to receive a science PhD; she authored several books and described more than 200 species before she passed away in 2010 at the age of 91.

Like the diminutive algae to which she devoted much of her career, Izzie was small in stature. But her impact in the scientific community was profound.

“She wrote the definitive books on algae in California and Hawaii,” Kyle says. “That we even have an herbarium at the Aquarium reflects the intellectual legacy of Izzie Abbott.”

For Sue Lisin, a longtime researcher at Monterey Bay Aquarium, seaweed memories go back over three decades. In the fall of 1985, she helped launch a project studying kelp forests around the Monterey Peninsula, and preserved seaweed plucked from the depths.

“I love seaweeds, and used Izzie’s California seaweed book extensively when I was studying them in college,” she says. “When the Monterey Bay Aquarium opened and chose kelp as its hallmark, I knew it was going to be a great place. A year later, I landed a job working on the Aquarium’s new kelp forest ecology project.”

Genesis of the herbarium

As part of the kelp forest study, seaweed specimens were collected and brought into the lab to verify the species and for preservation as vouchers documenting the study. The Monterey Bay Aquarium Herbarium also served to teach others about the species being studied, and helped the Husbandry team to maintain the living Kelp Forest exhibit as an accurate representation of the wild version.

“The kelp forest ecology project ended long ago, so we haven’t used the herbarium collection for many years,” Sue notes.

But now, she explains, laboratory techniques like stable isotope analysis allow scientists to learn much more about not just the specimens themselves, but also about the environments in which they lived.

Stable isotope analysis can tease apart the ratios of elements like carbon, oxygen and nitrogen in preserved samples. This can yield evidence of ambient water temperature and pH, as well as specific nutrients in an organism’s diet—potentially going back over a century.

The older seaweed specimens come from a collection that long predated Izzie Abbott, who joined the Stanford faculty in 1960. They are part of the Gilbert Smith Herbarium at Stanford’s Hopkins Marine Station. That collection contains 7,800 seaweed specimens collected and catalogued between 1890 and 1980. By contrast, the Monterey Bay Aquarium collection includes 600 specimens dating from 1970 to 2010.

Pressed seaweeds aren’t the only preserved marine specimens that hold secrets of the past. So do the feathers of seabirds, the vertebrae of white sharks, the incisors of sea otters, and the ear stones (otoliths) of bluefin tuna.  When these tissues grow, they take on information about their host and the conditions of the world around it.

“Kyle taught me that whales even have big blobs of ear wax that hold similar information,” Sue says.

Having stumbled on the herbarium, Kyle’s already thinking about how to apply this time machine approach to other marine life, from sharks to sea otters.

“We’re just scratching the surface looking at algae,” he says. “There are many other things we can do. We’re just now really understanding this opportunity.”

The ocean’s history is deeper and older than most of us can fathom. In Kyle’s vision, 2017 will be a year to unlock more of its memories—now filed away in humble specimen cabinets, just waiting to tell their secrets.

8 thoughts on “An ocean time machine”