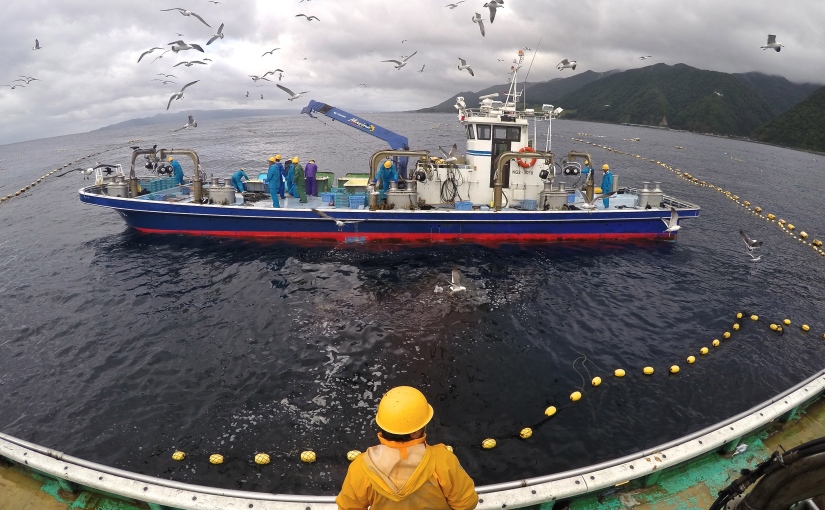 The Conservation & Science team at the Monterey Bay Aquarium has worked for more than two decades to understand and recover bluefin tuna – particularly Pacific bluefin, whose population has declined historically due to overfishing. A key piece of our efforts is tagging bluefin in the wild so we can document their migrations across ocean basins. Much of our work takes place in the Eastern Pacific, but this summer we’re partnering with Japanese colleagues to tag bluefin tuna in the Sea of Japan. Tuna Research and Conservation Center Research Technician Ethan Estess, working with Program Manager Chuck Farwell, is chronicling his experience in the field. This is the third dispatch in his series; you can read the second here.

It’s Day 9 of our bluefin tuna tagging expedition in the Sea of Japan. I’m sorry to report that after an exciting first day, we haven’t seen a single tuna in over a week.

We head out at 4 a.m. every day, excited at the prospect of a trap full of big bluefin ready to be fitted with satellite tracking tags. But when our crew hauls the net, what do we find? Lots and lots of yellowtail, or hamachi.

That’s fishing, I guess. Last fall I spent three weeks in chilly Nova Scotia and only tagged two tuna. (Weeks of bad weather kept us stuck in a cabin, watching B-rated movies.) Another year, we were hoping to tag bluefin off of Mexico, but the fishing was so slow we watched the entire Lord of the Rings trilogy in a day.

I’m really hoping this isn’t going to be another one of those trips.

Fortunately, this time we’re on sunny Sado Island, a beautiful place to visit if you ever find yourself in western Japan.  After checking the tuna trap each morning and finding it full of hamachi, we have time on our hands to work on research papers, and also see some of the sights.

The island is famous for a small park that rehabilitates a population of the endangered Japanese crested ibis. It’s a famous bird here, a national symbol, and people come from all around to gawk at the beautiful toki, as they are called.  We’ve toured some pottery studios and an old gold mine, and driven to the top of a 3,000-foot peak to get a great view of the island below.

We are in great hands. Dr. Ko Fujioka and his team from Japan’s National Research Institute of Far Seas Fisheries are kindly showing us gaijin (foreigners) around, teaching us useful Japanese phrases, and helping us order when we go out for meals. I’m lucky if I can order a bowl of udon without embarrassing myself.

We’ve had great conversations over cups of o-cha (green tea), with Dr. Fujioka patiently explaining the migrations of bluefin across the Pacific. The tuna we’ve come to tag are migrating south through the Sea of Japan from the island of Hokkaido, he explained, eventually reaching a spawning area that is suspected to be just south of us.

The tuna are intercepted on their migration by set-nets, like those used by the fishing cooperative with whom we’re partnering, but more often by purse-seine boats that wrap a school of bluefin with a net that could surround a football field.

Each day Dr. Fujioka receives emails and texts from friends around Japan informing him of the bluefin catch at different ports. He got promising news a couple of days ago: Many tuna were caught off Hokkaido, meaning that more may be heading our way past Sado Island. We are all excited for the bluefin to arrive, hopefully putting an end to these “hamachi days.”

One thought on “Dispatch from the Sea of Japan: Hamachi days”